Dota 2 has been around for many years. And during this time, Valve Corporation, the company that developed the game, has perfected a matchmaking system whose aim is to give players of similar skill a fair experience.

Of course, the system is far from perfect and the presence of smurfs and account buyers makes it even more imperfect. But it’s still good enough to ensure that, on average, Dota 2 matches will be balanced.

The goal of anyone who has played more than a few hundred hours of Dota 2 is to climb the ladder. And to do that, you need to gain MMR.

This article explains how Dota ranks work and how you can gain Dota 2 MMR.

The Basics of Dota MMR

It also factors in long periods of inactivity, during which your MMR gradually declines to reflect the fact that you’re becoming weaker at the game because of a lack of practice.

In Dota, MMR is not given to individuals but rather to teams. Your success depends upon your team’s success. If your team loses, even if you were the best player on the server by far, you will still lose MMR. 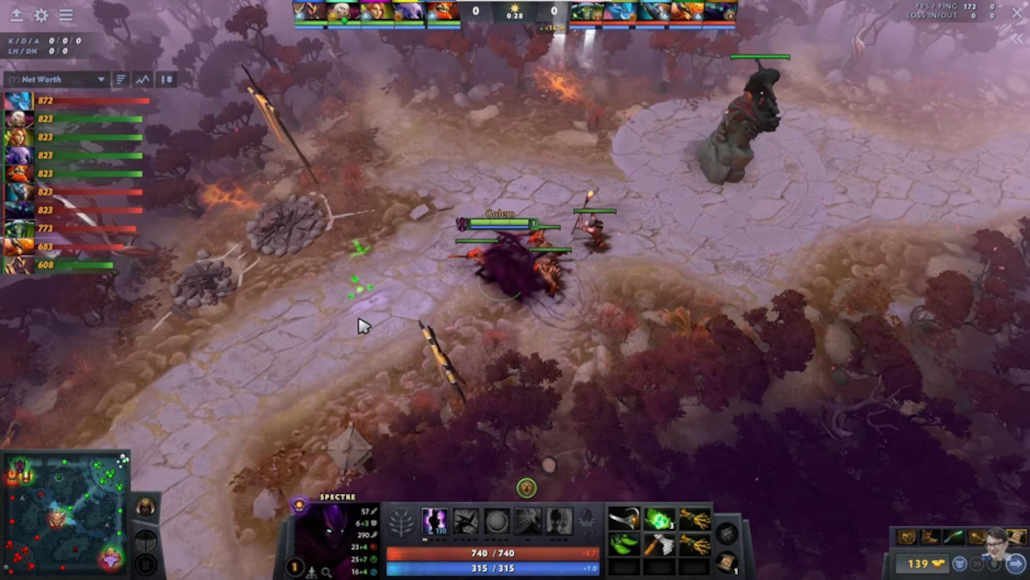 Images courtesy of the Valve Corporation

When you gain MMR, you gradually climb toward the next Dota 2 rank. The game’s ranking system was designed to give people a visual understanding of what their MMR signifies.

If you tell someone that your MMR is 5,200, they might not understand the meaning of that, especially if they’re new to the game. But if you tell them that you’re a Divine 2 player, they will instantly know what that means.

Dota 2 medals were introduced in 2017 and they’ve been quickly adopted by the community. There are 8 of them in total and each is further divided into 5 subdivisions, except for the last. 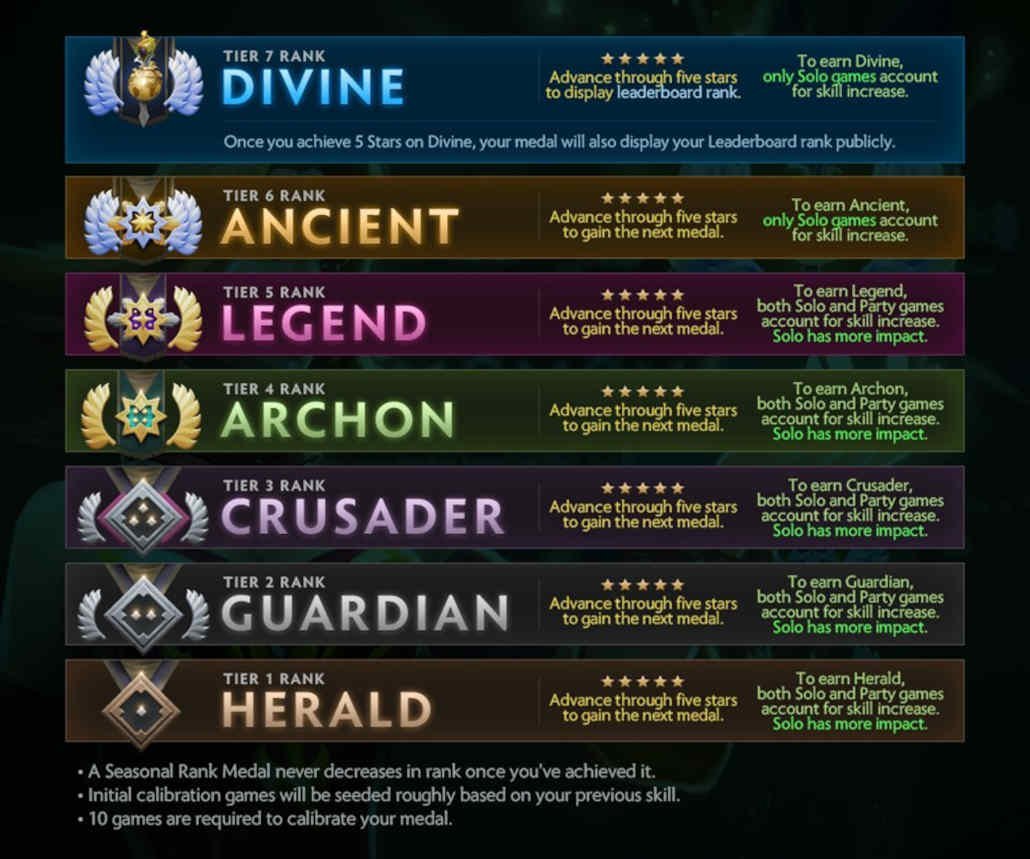 The available Dota 2 ranks are listed below:

When you reach the Divine 5 rank, you stay there until your MMR becomes good enough to receive an actual rank or number.

At that point, you become an Immortal Dota 2 player and you get to know how many other players have a higher MMR than you on a given server.

If you’re competing in Europe and you’re the 1000th player that means there are 999 players with a higher MMR than yours in Europe.

The skill difference between the highest ranked players and the casual Immortal players is usually huge. And that’s because there is no limit to how high you can climb. The world’s best Dota 2 players have 11,000 – 12,000 MMR. But by the time you’re 6,000 MMR, you’re already a ranked Immortal player. 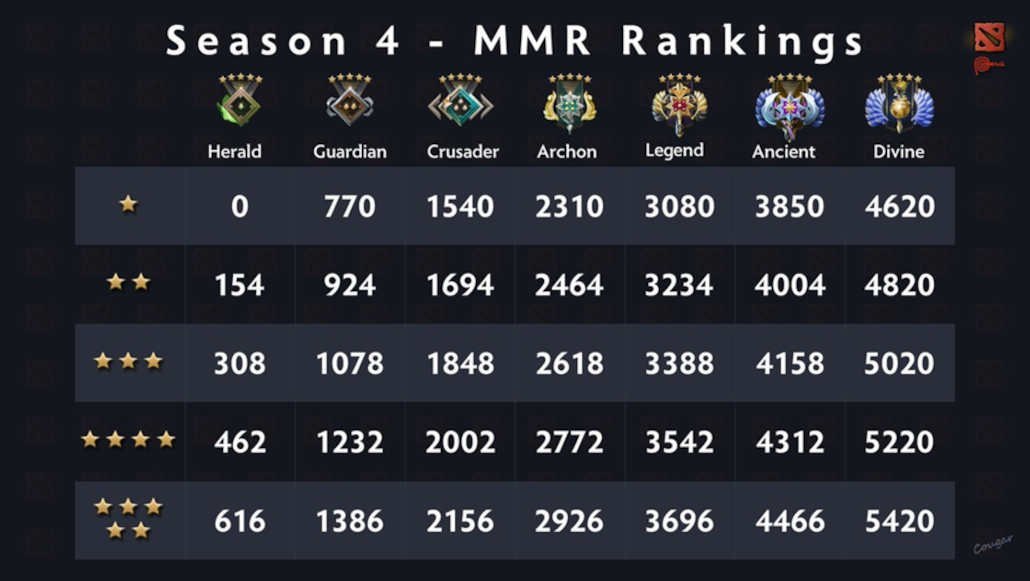 When the Dota MMR ranking system was first enhanced with medals, Valve decided to start resetting players’ MMR every once in a while, but still maintain their MMR almost unchanged after a reset.

This was done using ranked seasons, which have since become an almost redundant tool.

The first three Dota 2 seasons lasted for 6-7 months. The 4th one lasted for 12 months. And for the past few years, we’ve been in the 5th.

So it’s pretty obvious that Valve realized at some point that resetting players’ medals and asking them to play 10 matches to view their new MMR was a bad idea. But we might experience more resets.

If you ever get to the Immortal rank, you need to be aware of several unwritten rules that govern Dota 2 servers and the game’s community.

If someone on your team is rank 200 and you’re rank 800, you should always allow the higher ranked person to choose their preferred role.

If you pick a core role and especially carry or mid, you are expected to be good enough to outsmart the enemy carry/mid or at least be on par with them. Otherwise, your team’s chances of winning the match are very low.

The problem here is that if you choose to play position 1 or 2 as a rank 1,000 player against a rank 200 player, you will most often get destroyed. This is why the Dota 2 community hates people who ignore this rule and just do whatever they want.

In many cases, disregarding the implicit code of conduct will get you reported by the other members of your team.

That can result in a temporary ban and the need to play low priority matches.

Another thing that might happen is this: some of your teammates will intentionally throw the game and feed the enemy team, just to end the game faster. This happens if they don’t believe that there’s any chance of winning if you steal one of the core roles without being skilled enough to play it. 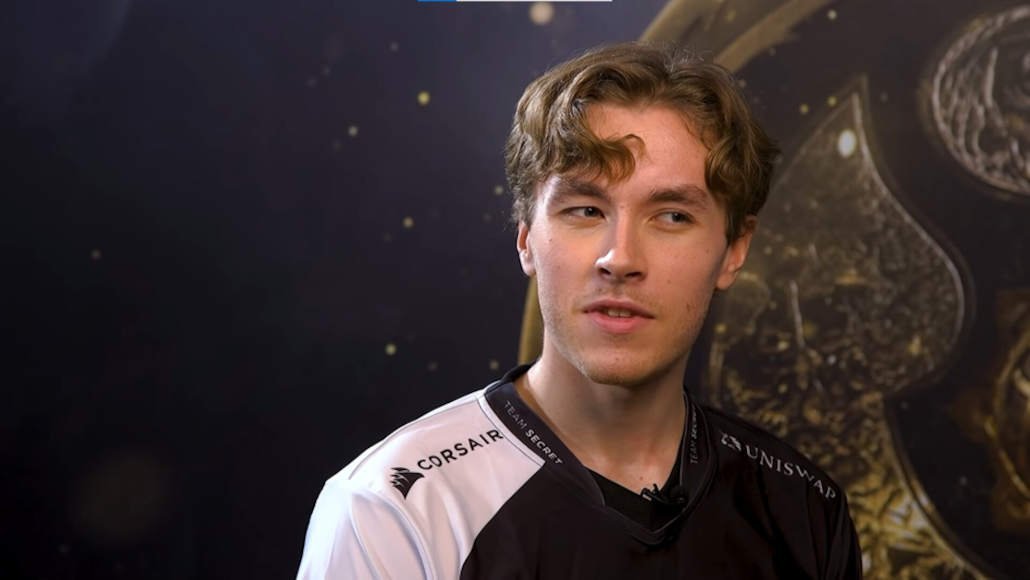 The Lowest Rank Players Are Expected to Pick Their Heroes First

In Dota 2, a lot is determined by the heroes picked by each team. The mid and carry heroes are considered to be much more important than the rest, so the players who play those roles are usually allowed by their team to pick last.

That’s because whoever picks last can look at all the other heroes that got picked and then make a really smart choice. But if your midlaner picks first, he will usually get heavily countered by the enemy team.

Dota 2 features more than 120 heroes and every single one of them can be countered in some way, by a set of heroes that work really well against him.

If your cores get perfectly countered by the enemy team, your chances of winning the match decrease substantially.

For these reasons, the lowest ranked players are generally expected to pick their heroes sooner and not steal the core roles. Of course, there are exceptions.

Some players have specialized in playing the support role. So even if they’re much higher ranked than the rest of their teammates, they will not play carry or mid.

How to Gain MMR in Dota 2

Gaining MMR in Dota 2 is quite difficult. It’s easy to win one or two or even five consecutive matches, but if you’re not considerably more skilled than the other players in your bracket, it’s very likely that you will lose all the MMR you’ve gained in the coming days.

In Dota 2, everyone gets the same amount of good and bad luck. In one match, you might have a teammate that loses his mind and starts feeding. But in another match, the same thing might happen to an opponent.

What distinguishes players who climb the Dota 2 MMR ladder from those who always stay at the same level or even lose MMR is skill.

If your understanding of the game is better than that of most players in your division, you will inevitably rank up over a period of a few weeks or months.

It all depends on how many games you play per day. The more you play, the faster you’ll rank up if you’re more competent than your current rank. But if you’re less competent, you’ll probably lose a lot of MMR.

It’s not impossible in Dota 2 to gain or lose 500 MMR in just a few weeks. But it’s more likely that you will lose than gain so much MMR. Because in order to gain it, your understanding of the game has to improve dramatically. And that’s not easy, given how complex Dota 2 is.

Here are a few things that you can do to gain MMR faster in Dota:

Specialize in a Few Roles

If you master the game all at once, you’ll get overwhelmed. There are 5 different roles, hundreds of items that you can buy, thousands of item builds, and more than 120 heroes to learn.

The players that you see at The International have more than 20,000 hours of experience. That’s how they got to where they are now. The game is extremely sophisticated but there are ways to master it much faster.

You must pick one or two roles and try to stick to them. In each game, pick one of these two roles until you’ve mastered both.

If you want to play mid, you’ll probably have to argue with someone in each game, as lots of people like this individualistic role. The same is true for the carry role. 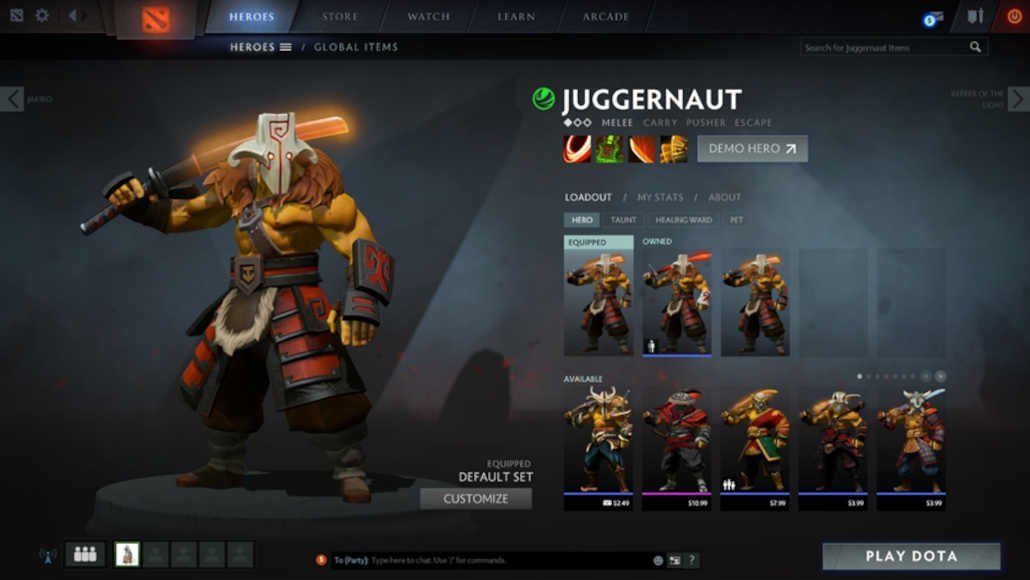 For each role that you want to master, pick around five heroes and play them over and over until you’ve learned all there is to know about them.

The reason why some players become very good at the game is that they become highly competent at playing one role and a small set of heroes that are well-suited for that role, and then their minds are free during the game.

When you do everything on autopilot, your mind can focus on other aspects of the game. When all of your concentration goes toward last-hitting creeps, it’s hard to think about strategic problems. Quite often, you forget to even look at the minimap.

This results in a lot of mistakes that you won’t even notice during the game. You’ll have to watch your replays to figure out what went wrong and what you could have done better.

If you can play just one hero, you won’t know what to do when that hero gets banned, heavily countered, or picked by the other team.

But if you have five of them that you can play really well, you’ll be able to pick the best one for the particular match you are playing and have a positive contribution.

You might still lose even under these conditions, but at least you won’t be the reason why your team lost. 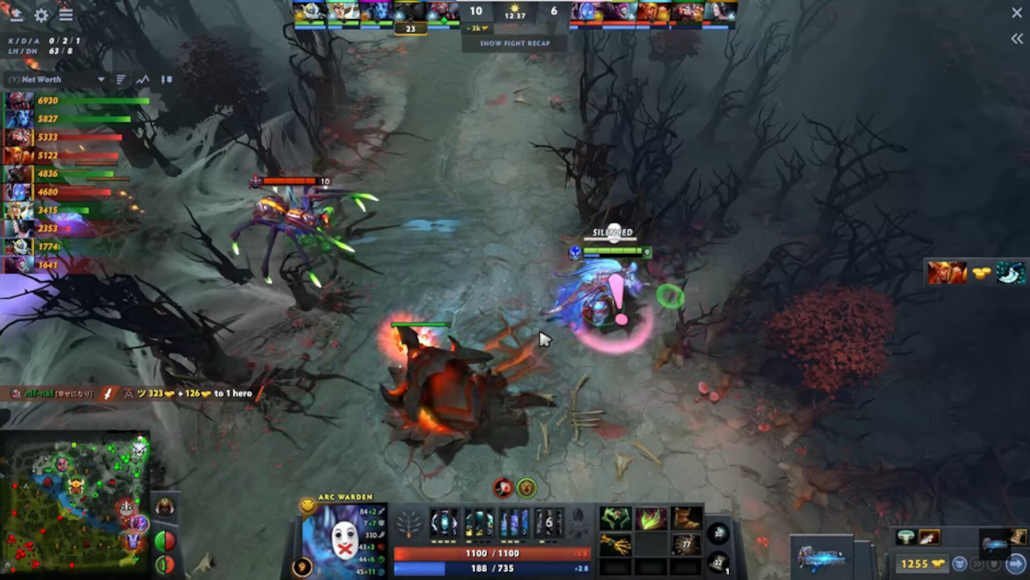 Most beginners make the mistake of never watching their replays. It’s very hard to notice your mistakes and learn how to avoid them in the future if you don’t do that.

The best players in the world always watch their own replays to better understand what happened during the game and how their team won or lost.

It’s incredible how many things you start to notice when you analyze your experience and take notes about everything you do during a game.

To improve your Dota MMR ranking, the goal is to optimize your playstyle and to do that, you need to optimize every aspect of your game: farming, team fighting, dodging ganks, etc.

For players who reach a high MMR rank, Dota 2 is like a piano. In every situation, they know what key to press to produce the effect they desire.

Meanwhile, novice players just make random moves on the map and hope that everything will work just fine. In many cases, it won’t. 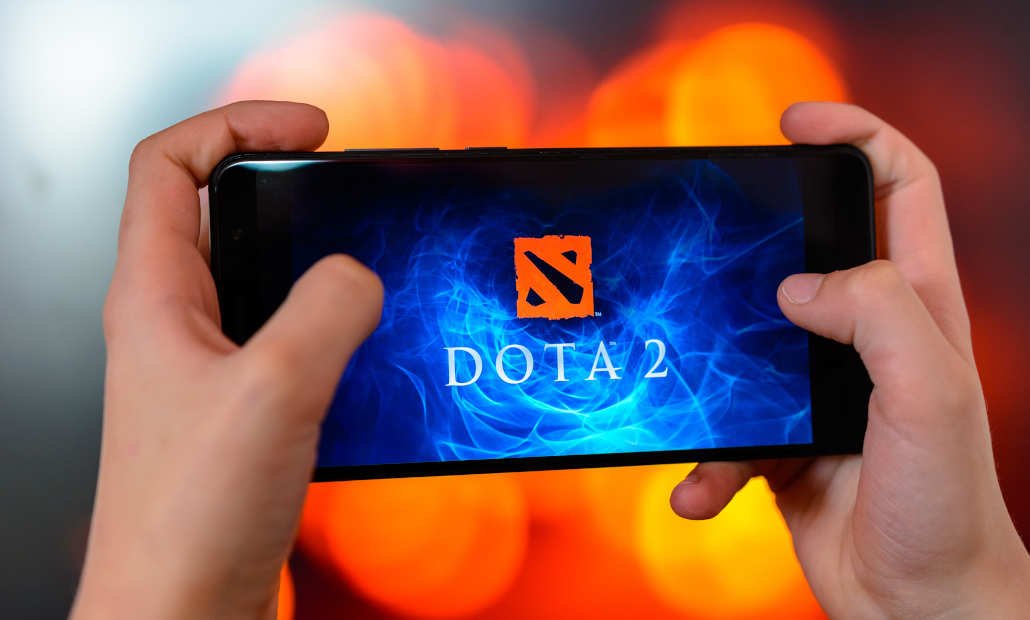